The inferior hypogastric plexus innervates the lower abdominal and pelvic viscera through the lower sympathetic chain and is responsible for visceral pain sensation from these regions. Pelvic visceral pain can be debilitating and often has a major impact on quality of life [It may even be associated with negative cognitive, behavioral, sexual and emotional consequences. There are multiple therapeutic options for pain control but some patients do not respond to conventional treatments. Interventional methods such as nerve blocks may need to be considered in these causes. They are also an effective alternative long-term opioid use which has a serious potential for dependence.

Two main approaches that have been used include transsacral and coccygeal transverse approach. 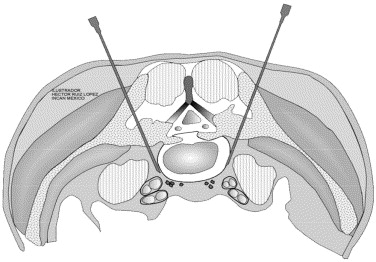 The transsacral approach allows the distribution on the anesthetic agent to the anterior sacral nerve roots and superior hypogastric plexus. It has disadvantages, such as because of transient paresthesia, nerve damage, rectal puncture, vascular penetration, hematoma, and infection. It causes transient paresthesia occurring in approximately 5% of the procedures performed. The sacral spinal nerves can be potentially damaged due to their close proximity.

The coccygeal transverse approach is relatively newer. The needle is inserted below the transverse process of the coccyx. This technique was reported to have fewer disadvantages but rectal puncture is possible if the needle tip is advanced too deeply into the presacral region. This can be avoided using lateral fluoroscopy. Other possible adverse events include tissue injury, hematoma, and infection as expected with any invasive procedure.

Overall, sympathetic inferior hypogastric nerve blockade is effective and safe for treatment of pelvic visceral pain. It can be combined with other forms of pain management to reduce the amount of supplementary medication needed to control the pain. Initial results seem promising but follow-up studies are required to establish their long-term efficacy and overall safety. Large randomized trials would serve best in determining which approach is best for this procedure.