Post-mastectomy pain syndrome (PMPS) was first described in the 70s as a type of chronic neuropathic pain syndrome that can occur following mastectomy for breast cancer. The risk of developing PMPS ranges based on the procedure performed – mastectomy + chemotherapy – 15%, mastectomy alone – 23%, lumpectomy + radiation – 27%, lumpectomy + radiation + chemotherapy – 33%. It is manifested in the arm or axilla, often in the actual scar, or deeper in the chest wall or even the shoulder. In some cases, causing phantom pain.

The condition starts with tissue damage, inflammation, and nerve damage occurring as a result of extensive surgery. There is additional damage to tissue from postoperative chemotherapy or radiation, which can further worsen the pain. There are a lot of processes at play that is responsible for persistent pain experienced in PMPS – peripheral sensitization, neuroma development, and spontaneous firing of regenerated nerve fibers. 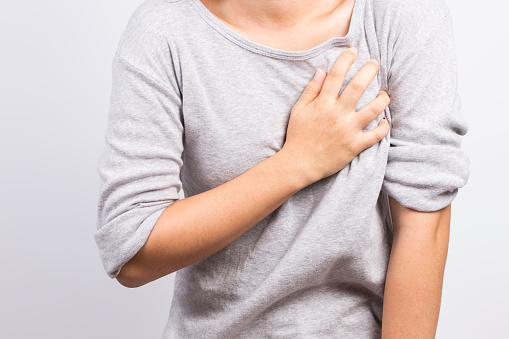 The pain is described as being of burning, tingling, and lancinating character.  The pain is throbbing and ranges from mild to severe, and is often accompanied by a sensation of pins and needles. According to a recent study, 43.8% of women undergoing mastectomy with axillary nodal dissection reported experiencing chronic pain. The upper quadrant breast surgery is considered to be the biggest factor for PMPS. develop with or without axillary surgery. Other risk factors for PMPS include radiation therapy, younger age, higher body mass index, and more invasive mastectomy procedures.

One huge factor that can help minimize the severity of PMPS is performing the breast-conserving surgical procedures. Furthermore, research has found that using lidocaine reduced nerve damage and inflammation.

Like any other neuropathic pain syndrome, there is no single treatment that is effective. One thing is sure that opioids are not indicated for PMPS, given the chronicity of the condition and the potential for addiction. Other pain relief methods that have been tried include nerve blocks, anti-seizure medications, and antidepressants. A research study found that a stellate ganglion block along with ketamine successfully decreased pain after mastectomy, reducing the need for analgesic medications. It usually takes multiple injections to effectively treat the pain. Alternative methods, such as mind-body techniques and acupuncture can also help to some degree. But physical therapy has not been shown to be effective.

PMPS can range anywhere from being mild and manageable to severe and disabling. The prognosis varies too. About one-third of patients tend to get better over time, one-third can be managed with proper treatment, and the remaining one-third are unable to find adequate pain relief with any of the available methods.

Overall, PMPS is a real and common problem for many women after mastectomy. It makes an already difficult condition more difficult and can be quite stubborn to manage. In general, patients do best with a multimodal approach with a certain combination providing proper pain relief. The ultimate goal should be to improve the overall functionality and life experience and that is achievable in many cases.